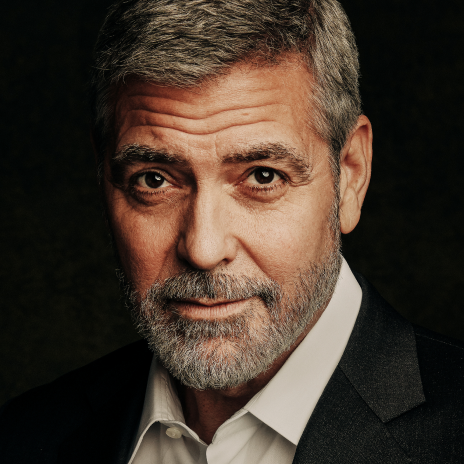 Oscar-winning actor & filmmaker, businessman, and human rights advocate
SIGNAL guest
George Clooney is an award-winning actor who is recognized as much for his global humanitarian efforts as he is for his accomplishments in the entertainment industry. /n Clooney’s achievements as a performer and filmmaker have earned him two Academy Awards, five Golden Globes including the Cecil B. DeMille Award, four SAG Awards, one BAFTA Award, two Critics’ Choice Awards, an Emmy, and four National Board of Review Awards. When Clooney received his eighth Academy Award nomination, he earned a special spot in the Oscar record books. He has now been nominated in more categories than anyone else in Oscar history. /n His film credits include Warner Bros’ Academy Award-winning drama Argo, Good Night, and Good Luck, and The Ides of March. Ides, which Clooney starred in, co-wrote, and directed, received Golden Globe nominations for Best Director, Best Screenplay, and Best Motion Picture Drama. In addition, the film received an Academy Award nomination for Best Adapted Screenplay. /n Before his film career, Clooney starred in several television series, becoming best known to TV audiences for his five years on the hit NBC drama ER. His portrayal of "Dr. Douglas Ross" earned him Golden Globe, SAG, People’s Choice, and Emmy Award nominations /n Clooney is a strong First Amendment advocate with a deep commitment to humanitarian causes. In 2006, Clooney and his father, Nick, went to the drought-stricken Darfur region of Sudan, which led to him addressing the United Nations Security Council. /n Among the many honors received as a result of his humanitarian efforts was the 2007 Peace Summit Award, given at the eighth World Summit of Nobel Peace Prize Laureates, and the 2010 Robert F. Kennedy Ripple of Hope Award. /n Clooney has produced three telethons: The Tribute to Heroes (post 9/11), Tsunami Aid: A Concert of Hope, and “Hope for Haiti Now”, the latter of which raised a record 66 million dollars from the public. /n In December of 2010, Clooney, along with the United Nations, Harvard University, and Google, launched The Satellite Sentinel Project, which allows private satellites to take photographs of any potential threats to civilians, detect bombs, observe the movement of troops and note any other evidence of possible mass violence in North and South Sudan. /n In March of 2012, Clooney and his father Nick were part of the delegation that peacefully demonstrated in front of the Sudanese Embassy in Washington, D.C., calling worldwide attention to the human rights violations being committed in Sudan, which resulted in their arrest. /n He founded The Sentry in 2015 to use forensic accountants to follow the money stolen from citizens of Sudan and South Sudan by their Governments. He has testified in front of Congress and worked with United States presidents, two Secretaries of State, and dozens of Senators to help bring peace to South Sudan. In August of 2016, George and his wife, Amal, launched the Clooney Foundation for Justice. One of their first projects - an ambitious initiative to educate hundreds of thousands of refugees in Lebanon - was showcased at the 2016 United Nations summit hosted by President Obama and UN Ambassador Samantha Power.
gclooney@test.com