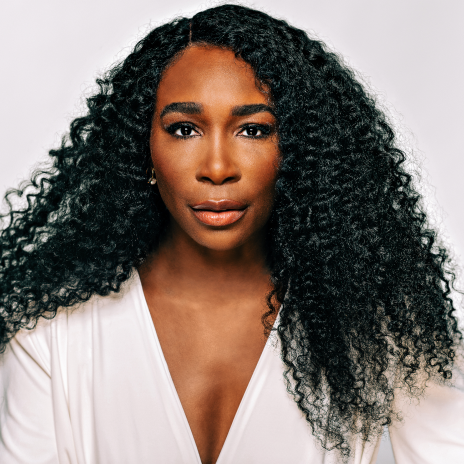 Tennis Champion, Business Entrepreneur and Philanthropist
SIGNAL guest
With 7 Grand Slam titles, 5 Wimbledon championships and 4 Olympic gold medals, tennis champion Venus Williams is arguably one of the most accomplished and inspiring women in the history of sports. /n Beginning her rise to the top at the age of 14, Williams quickly took the world of tennis by storm rising to the top-ranked position, breaking countless records, and winning numerous championships. /n Encouraged by her mother at an early age to explore her creative side, Williams enrolled in fashion school where she was instantly drawn into the world of fashion and interior design. True to her bold spirit, Williams parlayed her fine-tuned business acumen with her healthy competitive spirit into two successful design ventures. /n In 2002, after obtaining an Interior Decorator certification, Williams founded V Starr, a full-service commercial and residential design firm. Continuing with her love for design, Williams obtained an Associate of Science in Fashion Design and in 2012 she launched the fashion-forward activewear brand, EleVen by Venus Williams. In May 2020, Venus partnered with Credo Beauty to debut an award-winning line of clean, mineral-based SPF products under the EleVen by Venus umbrella. Her entrepreneurship in the health, wellness and beauty space also includes her role as Chief Brand Officer to Asutra and in December 2020, Williams launched her plant-based protein company, Happy Viking. /n Sticking to her entrepreneurial spirit, in 2009 Williams along with her sister, Serena became the first female African Americans to have a stake in an NFL franchise after joining the ownership group of the Miami Dolphins. The following year, Venus published her motivational book, "Come to Win" which reached No. 5 on the New York Times Best Sellers list. /n Most recently, Venus served as Executive Producer on the Academy Award-winning Warner Brothers biopic King Richard, which detailed the influence her father and coach, Richard Williams, had on her childhood and careers as she became a tennis icon and changed the sport for generations to come. /n Throughout her career, Williams has been a steadfast advocate for equality. In 2006, UNESCO, the United Nations’ cultural organization, titled her as the first “Promoter of Gender Equality.’ In 2007 it was her unwavering fight, which led Wimbledon to award women players the same pay as their male counterparts and most recently, she launched an awareness initiative called the #PrivilegeTax in conjunction with EleVen to bring attention to the wage inequality and unveiled a platform of resources for young women to get inspired and address the issue on a grassroots level. /n Williams' achievements throughout her legendary career have merited her a plethora of additional accolades, including being honored as Variety’s “Power of Women”, Glamour Magazine’s ‘Woman of the Year,’ CARE Impact Award for Gender Equality, ESPN’s ‘WTA Player of the Year,’ and Forbes’ ‘Celebrity 100’ among others. In September 2009, the Anti-Defamation League (ADL) honored Williams with the Americanism Award for publicly speaking up for Israeli player Shahar Pe'er who was barred from the Dubai tennis tournament. /n Williams holds Bachelor of Science in Business Administration from Indiana University East and an Associate of Science in Fashion Design from The Art Institute of Fort Lauderdale.
01venusspeaker_signal@twilio.com